We buy houses in The Beaches as-is.

Get a no-obligation cash offer for your house in The Beaches. We buy as-is, for the highest off-market price. Skip the repairs, avoid showings, and move on your timeline. Get a $10,000 cash advance before closing. 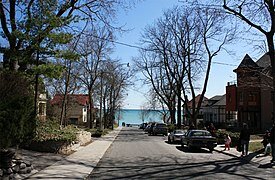 The Beaches (also known as “The Beach”) is a neighbourhood in Toronto, Ontario, Canada. It is so named because of its four beaches situated on Lake Ontario. It is located east of downtown within the “Old” City of Toronto. The approximate boundaries of the neighbourhood are from Victoria Park Avenue on the east to Kingston Road on the north, along Dundas Street to Coxwell Avenue on the west, south to Lake Ontario. The Beaches is part of the east-central district of Toronto.