Get a no-obligation cash offer for your house in Regent Park. We buy as-is, for the highest off-market price. Skip the repairs, avoid showings, and move on your timeline. Get a $10,000 cash advance before closing. 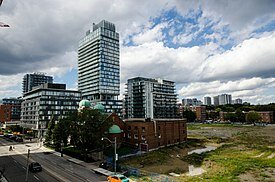 Regent Park is a neighbourhood located in downtown Toronto, Ontario built in the late 1940s as a public housing project managed by Toronto Community Housing. It sits on what used to be a significant part of the Cabbagetown neighbourhood and is bounded by Gerrard Street East to the north, River Street to the east, Shuter Street to the south and Parliament Street to the west. Regent Park’s residential dwellings, prior to the ongoing redevelopment, were entirely social housing and covered all of the 69 acres (280,000 m²) which comprise the community. The original neighbourhood was razed in the process of creating Regent Park. The nickname Cabbagetown is now applied to the remaining historical, area north and west of the housing project, which has experienced considerable gentrification since the 1960s and 70s.