We buy houses in Leaside as-is.

Get a no-obligation cash offer for your house in Leaside. We buy as-is, for the highest off-market price. Skip the repairs, avoid showings, and move on your timeline. Get a $10,000 cash advance before closing. 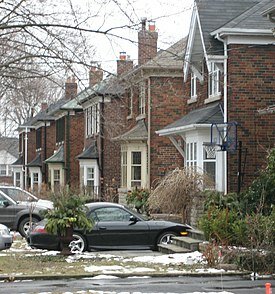 Leaside is an affluent neighbourhood in Toronto, Ontario, Canada. It is located northeast of Downtown Toronto, in the vicinity of Eglinton Avenue East and Bayview Avenue. The area takes its name from William Lea and the Lea family, who settled there in the early years of the 19th century. The area first developed as farmland along with Toronto through the 19th century. It was incorporated as a town in 1913. In 1967, it amalgamated with the township of East York to form the borough of East York. In 1998, it became part of the city of Toronto. It is commonly seen as one of the most expensive and exclusive neighbourhoods in the city with a median household income of $129,930, serving upper-middle-class families.