Get a no-obligation cash offer for your house in Humber Heights-Westmount. We buy as-is, for the highest off-market price. Skip the repairs, avoid showings, and move on your timeline. Get a $10,000 cash advance before closing. 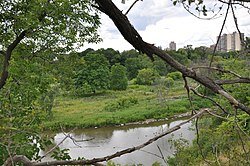 Humber Heights-Westmount, also known as Humbervale, is a neighbourhood in Etobicoke, Toronto, Ontario. The neighbourhood is bounded by the west bank of the Humber River, west to Royal York Road and south to Eglinton Avenue West. The Humber Creek divides the area into the northern ‘Humber Heights’ (originally the Etobicoke side of York Township’s Weston) and the southern ‘Westmount’ (originally part of the ‘Richview’ farming district) centred along Scarlett Road and La Rose Avenue.