We buy houses in Etobicoke as-is.

Get a no-obligation cash offer for your house in Etobicoke. We buy as-is, for the highest off-market price. Skip the repairs, avoid showings, and move on your timeline. Get a $10,000 cash advance before closing. 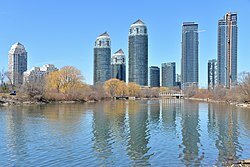 Etobicoke is an administrative district and one of six municipalities amalgamated into the city of Toronto, Ontario, Canada. Comprising the city’s west-end, Etobicoke was first settled by Europeans in the 1790s, and the municipality grew into city status in the 20th century. Several independent villages and towns developed and became part of Metropolitan Toronto in 1954. In 1998, its city status and government dissolved after it was amalgamated into present-day Toronto. Etobicoke is bordered on the south by Lake Ontario, on the east by the Humber River, on the west by Etobicoke Creek, the city of Mississauga, and the Toronto Pearson International Airport (a small portion of the airport extends into Etobicoke), and on the north by Steeles Avenue West.