Get a no-obligation cash offer for your house in Dorset Park. We buy as-is, for the highest off-market price. Skip the repairs, avoid showings, and move on your timeline. Get a $10,000 cash advance before closing. 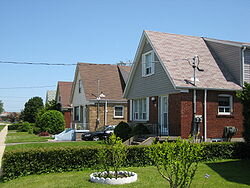 Dorset Park is a neighbourhood in Toronto, Ontario, Canada. It is located in the western part of the district of Scarborough. The neighbourhood is bordered by Highway 401 to the north, Midland Avenue to the east, Lawrence Avenue to the south, and Birchmount Road to the west. Kennedy Road runs along the neighbourhood’s centre north and south and Ellesmere Road runs along the centre east and west. The area south of Lawrence Avenue, north of the hydro corridor, is known as McGregor Park and is often included as part of Dorset Park.