Get a no-obligation cash offer for your house in Crescent Town. We buy as-is, for the highest off-market price. Skip the repairs, avoid showings, and move on your timeline. Get a $10,000 cash advance before closing. 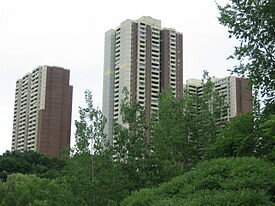 Crescent Town is a neighbourhood in Toronto, Ontario, Canada, in the former borough of East York. It is located near Victoria Park Avenue and Danforth Avenue. It mainly consists of high-rise apartment complexes, built originally to take advantage of the opening of the adjacent Victoria Park subway station, which connects to the central quadrangle via a partially covered walkway.