We buy houses in Cliffcrest as-is.

Get a no-obligation cash offer for your house in Cliffcrest. We buy as-is, for the highest off-market price. Skip the repairs, avoid showings, and move on your timeline. Get a $10,000 cash advance before closing. 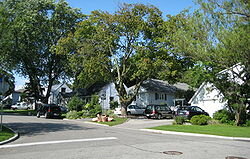 Cliffcrest is a residential neighborhood in Toronto, Ontario, Canada. It is located along the shores of Lake Ontario in the district of Scarborough, bordered by Midland Avenue to the west, the Canadian National Railway to the north, and Bellamy Road to the east. The name Cliffcrest is in reference to the Scarborough Bluffs, which are sandy cliffs along the lake’s edge. The neighborhood feels much more like being at a cottage than being in Canada’s largest and most densely populated city. For the smaller cottage-like homes, the average value is only middle of the pack, making it affordable by Toronto standards. Most homes are single, detached houses with a high ownership rate. There are fewer high or mid rise buildings in the area.