We buy houses in Orleans as-is.

Get a no-obligation cash offer for your house in Orleans. We buy as-is, for the highest off-market price. Skip the repairs, avoid showings, and move on your timeline. Get a $10,000 cash advance before closing. 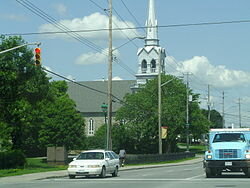 Orleans is a suburb of Ottawa, Ontario, Canada. It is located in the east end of the city along the Ottawa River, about 16 km (10 mi) from Downtown Ottawa. The Canada 2016 Census determined that Orléans’ population was 116,688. Prior to being amalgamated into Ottawa in 2001, the community of Orléans was spread over two municipal jurisdictions, the eastern portion being in the pre-amalgamation City of Cumberland, the western portion in the City of Gloucester. According to the 2016 census, 69,178 people lived in the Cumberland portion of Orleans, while 47,510 people lived in the Gloucester portion. Today, Orléans spans the municipal wards of Orléans, Innes, and Cumberland. Orléans contains a significant francophone population.