We buy houses in Carlingwood as-is.

Get a no-obligation cash offer for your house in Carlingwood. We buy as-is, for the highest off-market price. Skip the repairs, avoid showings, and move on your timeline. Get a $10,000 cash advance before closing. 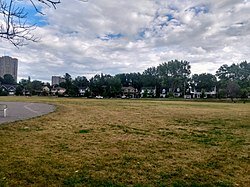 Carlingwood is a neighbourhood in Bay Ward in the west end of Ottawa, Ontario, Canada. The neighbourhood is roughly bounded on the north by Richmond Road, on the east by Sherbourne Road, on the south by Carling Avenue and on the west by Woodroffe Avenue. This area corresponds to census tract 5050032.01, which had a population of 3,558 according to the Canada 2016 Census.